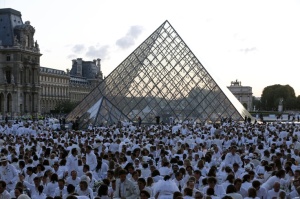 Once a year, from Paris to San Francisco, Sydney to Singapore, a crowd of strangers in garb of head-to-toe white gathers at mystery locations to . . . dine outdoors. A strange cult? A flash mob? It’s certainly more the latter than the former. The granddaddy of the flash mob, Dîner en Blanc (Dinner in White) has been attracting sophisticated party-goers bent on etiquette and elegance for more than twenty-five years.

This isn’t your red-checked-tablecloth-and-ants kind of picnic. Elaborate white outfits run the gamut — all the way to evening wear — crystal and china sparkle beneath flickering candles, and fresh white flowers bloom in ornate table arrangements. Diners tote their own dinner, as well as tables and chairs. 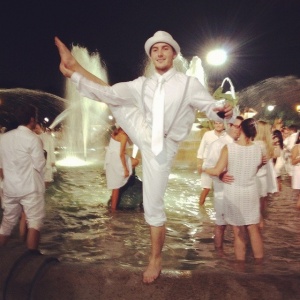 The original gathering was a brainstorm of François Pasquier. In 1988, after having returned to Paris after a long absence, he asked his friends to meet at Bois de Boulogne in Paris. ‘And dress in white,’ he added, ‘so that we can find one another.’

The party was such a success they made it an annual affair. Upping the ante in 1991, they descended upon the Pont des Arts in the heart of Paris, keeping the location a secret until the last moment from government officials who wouldn’t approve the posh event.

It just goes to show what one great idea can spawn.

Today, François Pasquier’s son, Aymeric Pasquier, along with Sandy Safi, continue this tradition of elegance in more than forty cities around the world.

Strictly by invitation, people assemble at predetermined locations, ready to descend upon and dine outdoors at a public location. From the Château de Versailles to the Champs-Élysées and the Louvre Pyramid,  fashionable crowds dine at the world’s most revered spaces.

But the joyful tradition continues…

And one thing is true: People the world over love to have fun. Do you have a fun idea you could expand upon?

3 thoughts on “Grandaddy of the Flash Mob: Diner en Blanc”